3/1/2018: We made it. It’s March. Though it’s still technically winter, the winter months are behind us. I can begin to look forward to trail walks and sunshine and flowers and squirrels and birds at the feeders. Maybe I’ll plant a garden this year. Maybe an herb garden? Probably not. But I can think about it now and that’s basically my point.

3/3/2018: My fourth-grader is working on a PowerPoint presentation about the state of Tennessee for school. She included a picture of Justin Timberlake under “State Resources.” I swear, I had nothing to do with this.

3/5/2018: Since I started the Whole 30 diet, our house never doesn’t smell like sautéed onions anymore. Sigh.

3/7/2018: We had Buffalo chicken balls for dinner tonight and we’re going to have pulled pork butt tomorrow. Basically, we just eat the private parts of farm animals now.

3/11/2018: My writer’s block is starting to become a real problem. I go to the Erma Bombeck Writers’ Workshop in less than a month and for all I know, I can’t even write anymore. In other news, I ordered business cards to take to the conference so I’ll be able give my name, address, blog, and email to a bunch of other people who can write.

3/13/2018: I dreamed last night that the apocalypse happened and then all of the dinosaur skeletons on earth, including the plastic and toy ones, turned into dino-zombies. And it was scary. I woke up and had to watch TV to calm down enough to go back to sleep. I can’t decide if I’m proud of this or not.

3/14/2018: Adulthood means fighting a headache, reminding yourself to pick up milk on the way home, and trying to keep up with the dishes, all while dreaming about what you’re going to put in your next Amazon.com order.

3/16/2018: Since starting Whole 30, our food budget has risen from about $250 a week plus restaurants to $15,000 per week. But we’re eating all kinds of grass-fed, cage-free, organic, preservative free, sugar-free, fresh, whole foods so we’ll be very, very healthy when we file for bankruptcy.

3/18/2018: Today, I listened to the girls make pretend YouTube videos about their pretend exotic pets that were made out of slime that they made using a recipe from a YouTube video, and I realized that the world is a different kind of place than when I was growing up. 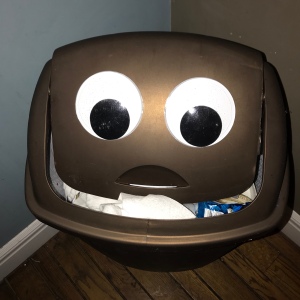 3/19/2018: I put giant adhesive googly eyes on the lid of our kitchen trash can today. So now he looks very concerned when he’s full.

3/31/2018: As I reflected on the passing of another year and read birthday greetings on Facebook from near and far, it occurred to me that 38 could be when I get it together and finally start acting like an adult. But then I took a drink out of my new unicorn coffee mug, looked at Roseanne, the 4-foot inflatable velociraptor that my husband gave me, and realized that I might not be quite ready for that after all. Maybe next year.

4/9/2018: The kids took a new angle in their efforts to get a dog tonight. They presented research regarding the benefits of dog ownership in childhood. “Kids who have dogs are 95% happier than kids who don’t, Mom. And daddy didn’t have dogs when he was a kid and he’s super crabby but you did, and see how happy you are?” Statistics and flattery for the win!

4/13/2018: I impulsively joined the National Society of Newspaper Columnists and entered their annual contest. They had a great plug for the contest at the conference last weekend so when something popped up in my Facebook feed about it today, I bit the bullet. Took the plunge. Carped that diem. Actually, I probably just wasted $80 but as I always say, you spend some, you might win some. (This is the first time I’ve said that.)

4/14/2018: I was settled in at day two of a conference for work and everyone was quietly listening to the speaker. Naturally, I chose that moment to spill a can of La Croix water all over the table. While I was cleaning up the mess, I hit my hand on the table and knocked the stone out of my ring. As I got down on all fours to find the stone, I immediately re-injured my back. I eventually found the stone and got back in my chair with as much dignity and little drama as I could. Everything that happened today after those two minutes was easier.

4/22/2018: David Sedaris is to me now what New Kids on the Block was to most girls my age back in the late eighties. Speaking with him tonight at the Peabody in St. Louis, though brief, was surreal. He drew a middle finger in one book he signed for us and a hairy ass in the other one. The pieces he read were at once offensive and hilarious and beautiful and I think I’m in love.

4/24/2018: For a few minutes today, I considered reducing my hours at work so I could have one day off a week just for writing. I decided against it for a variety of reasons, so we return now to my regularly scheduled existential crisis.

4/30/2018: I’ve been a mom for a whole decade now. I don’t think my parenting skills have improved all that much since 2008, but I have more stories to tell. And significantly more laundry to do.

5/1/2018: It’s officially too hot in our house for pants. In other news, my eyebrows are so bushy and unruly, I’ve had to start conditioning them. I wish that was a joke.